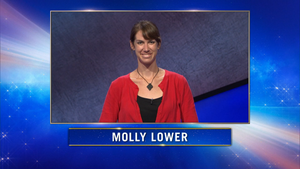 Ms. Lower was featured as a contestant on a recent episode of "Jeopardy!"

Congratulations to AP US History teacher Ms. Lower for appearing on the Tuesday, September 29th, episode of Jeopardy! Regarding her experience, Lower wanted to share that everyone associated with the production was truly nice and thoughtful. She added, "They, and all the contestants, were really kind, and I especially appreciated that given the times we're living in."

Lower figured out what the Final Jeopardy question was asking and the correct answer two seconds before time ended, meaning she did not have a chance to change her answer. Lower concluded by thanking Alemany and said, "I think the best Jeopardy! prep was being a teacher!"

Ms. Lower and the other episode's contestants can be viewed on the Jeopardy! Contestant Zone page, under Tuesday, 9/29.