About Us » Bishop Joseph Sadoc Alemany

Bishop Joseph Sadoc Alemany, O.P. (1814 - 1888)
“An Apostolic Bishop… A Man Beloved By All.”
The name of Archbishop Joseph Alemany is written large in the history of the Catholic Church in California for he met and conquered the challenging problems of a most difficult pioneer period.
Origins: Joseph Sadoc Alemany was born at Vich in Spain, July 3, 1814*. At an early age he entered the Order of Preachers (Dominicans), and was ordained priest at Viterbo in Italy, March 27, 1837. In Rome, on June 30, 1850, he was consecrated Bishop of Monterey in California. On July 29, 1853 he was transferred to the See of San Francisco as its first archbishop.
After 31 years of service, he resigned in November 1884. Archbishop Alemany died at Valencia in Spain, April 14, 1888.
This synopsis, however, does not do justice to the life of a man who was noted during his lifetime as “a worthy religious, a zealous priest, and an apostolic bishop… a man beloved by all.”
Turning Points: In many ways Joseph Alemany was a “Renaissance man.” He was well educated in both theology and philosophy. He could also write and speak Spanish, Latin, Italian, French, and English with equal facility. However, what could have been a matter of boast for others was not so for Alemany.
Being of service to his “sisters and brothers in Christ” would prove to be the driving force in Father Alemany’s life. Shortly after ordination to priesthood, the young Spaniard requested to be assigned to the missions. In the early spring of 1840 he was sent to the United States. Alemany served as a missionary in Ohio, Tennessee, and Kentucky for over ten years, eventually being chosen by his Dominican brothers to lead the Province of the U.S. In 1850, however, an event occurred which was to change his destiny.
After the war of 1847, California passed from Mexican to American rule. The populace consisted of two groups that were constantly at odds: the Spanish-Mexican element and the Americans. To this sometimes-volatile mix was added the discovery of gold in 1848, which attracted immigrants from every part of the known world. Chaos reigned supreme in this acrid mix of the old world and the new. In the eyes of many, there was “neither God nor ruler for the ‘forty-niners.’” The appointment of Alemany as the first bishop under these conditions was providential.
Alemany was extremely suited for the position of bishop of California, for he was a mixture of both the old world and the new. A Spaniard by birth, though an American in spirit, Alemany’s ten years of mission experience made clear to him the situation confronting the Church in the United States. It was decided by Rome that a “blending of the old world and the new” in California would progress more easily under his administration than under any other. On May 31, 1850, Father Alemany was appointed to the Diocese of Monterey, California. On June 30th, in the city of Rome, he was consecrated a bishop. He spent the next few months traveling across Europe in search of those who could assist in the California ministry.
Being of Service: Though small in stature, Bishop Alemany had a great spirit. He was zealous in spreading and strengthening the faith in the hearts of men and women and focused on providing the best for his flock. He was particularly concerned with providing quality, affordable education for the youth within his care. In this way, he fulfilled the goal of providing excellent leaders for the church and community. Recognizing this devotion, many of the earliest donations of land were made with the stipulation that such be used for the establishment of schools. Religious Orders known for their dedication to the ministry of education (e.g., Dominicans, Christian Brothers, Jesuits) were among the earliest to respond to Alemany’s call for assistance in the California mission. Each group was instrumental in providing quality educational opportunities for the people of California. Each also established colleges/universities that to date have strong traditions of excellent education.
Bishop Alemany was dedicated to both excellent and affordable educations within his diocese. At times this desire found him at odds with his collaborators in the mission. He removed diocesan clergy from one school and replaced them with Christian Brothers because he felt the Brothers could provide the better education. He had a dispute with one religious Order—affirming the quality of the education they provided, but admonished them for the high cost. The bishop’s standards were high—for the sake of his flock. However, in all of his dealings Alemany was respectful and careful to delineate in writing the reasons for his decisions.
In 1884, after over thirty years of service, Archbishop Alemany resigned his See. Though elderly, he traveled from San Francisco to Utah in order to personally meet and greet his successor. After transferring the diocese to the new bishop, Alemany returned to his native Spain. There he continued to work on behalf of the Church in California.
Alemany died a man deeply loved and respected in both the new world and the old. Throughout his life Joseph Sadoc Alemany, O.P. was the incarnation of the Bishop Alemany High School Mission Statement: He was intellectually accomplished (a classically educated “Renaissance man”); he was a conscientious leader—very concerned about the welfare of others; and he was boldly dedicated to creating a society where people of every status were enabled to live up to their full potential (a courageous agent of justice).
[Sources include: A Biographical Sketch of Right Reverend Joseph Sadoc Alemany, by Msgr. Francis J. Weber (available at Bishop Alemany High School’s Sr. Teresa Eberst Library); A Remarkable Legacy: The Story of Secondary Schools in the Archdiocese of Los Angeles, by Msgr. Francis J. Weber; the Catholic Encyclopedia, and Dominican Library - on line].
*Some sources cite July 13, 1814 as Bishop Alemany’s date of birth. 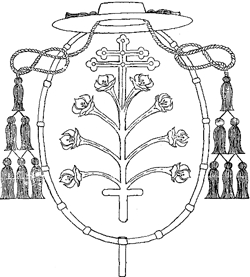 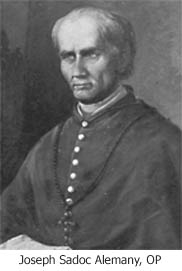